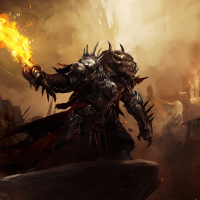 Lysandus Member Posts: 18 Apprentice
June 7 edited June 7 in Common Grounds
Hi all, as requested, I made this new discussion post so we can all share our costumes, gimmicks and our thoughts and opinions about them. I'll start first!

Character Description:
Exhibiting the grand poise worthy of a Lord of Magnagora, this man oozes calm but assured confidence, each movement made with a measure of grace. Control lies accentuated within each simple movement: the pass of the hand, ease of gait, angular turn of the head, all is accented by the lithe muscular form he bears encased in pale, aristocratic flesh. Let no mistake be made, in that it is apparent that he is an ordinary archlich human ouroborian demigod changeling, whose skeletal form towers overhead. His limbs are but bone and dark withered muscle, long and spindly, appearing simultaneously fragile and powerful with all the grace of a trained warrior. His hands are similarly angular, each finger tapering into a thin, sharp-looking point. Bone twists into a rib cage down the centre of his chest, curling over cloth and armour alike, each rib curving to connect to his surprisingly limber spine. The bottom of his sternum extends further downward, splitting into a facsimile of a pelvis, before again splitting, bone growing forth and angling backwards, then upward, splitting again to form shapes similar to a stag's antlers, each tine deadly sharp. From his scarred skull peer two eyes, one merely pale mist whilst the other a dark, glowing gold. Tall spires of bone, sharpening to wicked points, arch from either shoulder.

Item: a tattered robe of necrotic dominance, rippling softly from an unseen wind
Description:
The oblivion of death reigns over this heavy, almost formless robe. The
shape of the body beneath is obscured from throat to toe in thick, deep
black cloth, the tattered hem covering the feet and making the wearer
appear to glide rather than walk. Some shape is added to the upper
portion thanks to the front of a ribcage sewn to the chest. Contrary to
normal skeletal structure, several lengths of bone almost like wings or
additional limbs reach out from the bottom of the ribcage, curving
behind the back and rising up in sharp spikes over the shoulders. A
final deathly flourish is provided by a sheet of transparent, spectrally
treated silk forming tattered sleeves and an ominously glowing mantle.

Item: a skeletal mask of crowned death.
Description:
This macabre mask, shaped almost entirely from bone and secured by
strips of leather, makes a definite statement on the nature of death.
The entire front, from chin to forehead, has been carved from a skull
and lacquered for preservation. The remaining bone has been worked into
spikes and spaced around the forehead, jutting upward in a shape
reminiscent of a crown. The combination of the skull's crown, rictus
grin and empty eye sockets gives the mask a distinct air of amused
arrogance.

Item: a severing scythe
Description:
Rough, unfinished ravenwood comprises the handle of this malicious weapon, nearly as long as the average human is tall. About the midsection of the haft, tattered black fabric has been wrapped about and secured with a rudimentary knot, providing a grip. At the apex of the shaft, the wood swells, one side coming to a carefully-carved point while the other supports the wide, crescent-shaped blade of the weapon. Forged of steel, the edge gleams brightly; though chipped and nicked in places, it nonetheless possesses a deadly honed precision.

Gimmick:
Lysandus stands in front of the crowd and taps the blunt end of a severing scythe on the floor. "As you all know, we Magnagorans have a long history with death, given our ties with Urlach, the Ur'Guard and Necromancy. Unlike others who view it as some sort of taboo or reverence, you may say we worship death to a degree." He looks around solemnly and raised his boney hand clenched into a fist. "What better way to show it off than to be what I think the Aspect of Death would look like." he then expertly twirls the scythe over the air and catches it deftly on his other hand, "Every death, from the smallest mouse, to the strongest Demigod or Ascendant out there or even slaying spawns of Kethuru, I grow stronger, I feed on souls and essence seeping through the wounds of their vessel as the warmth of life slowly fades away." he grins behind his mask, "If given the chance, I would deny the souls going through the tapestry of life and feed on it!" He cackles madly before coughing and nods, "That would be all."
11