The Story So Far: Esei 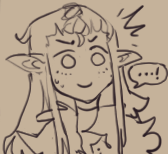 Esei somewhere, most likelyMember Posts: 203 Fabled
April 2 edited July 1 in Event Scrolls
So, I've seen more than one person putting up logs of their character's arcs (looking at Illyria, Cheliyi, and Rhalkyr specifically, quite possibly Gurashi and others, I am very forgetful! I'd 100% recommend going to check out their logs also, as Esei tends to be a key character.) So, I decided to do the same, but spanning from my first ever logs to ones I've collected now. Some of them may be double-posted somewhere else on the forums, but I thought it might be more prudent to collect them all in one post. I will also be excluding org, order, and guild secrets for... obvious reasons! I also do not appear to have logged a lot, though trust me my three brain cells are working at full capacity to remember everything.

Please note some of these earliest logs took place before non-binary genders were implemented! Others have been recently edited to be more legible and many have been renamed. They are (mostly) in chronological order.

Under the Willow - a novice (and laughingly naive, looking back) Esei and @Lief meet for the first time after Shashi's death.

Doubting the Glomdoring - shortly after the above meeting, Esei talks to @Gurashi and try to define the difference between mercy and patience.

Everything Will Be Okay - sometime after joining @Nocht's order, Esei heads to His fulcrux after a nudge in the Aetherplex. It's a very spooky encounter. (Takes place after Esei's Rite of Awakening)

Shower of Blackthorns - a few RL days after that encounter, Esei returns to Nocht's fulcrux (which is becoming a pattern...).

Potential - Gurashi and Esei talk again - this time about potential.

"A shame you will not save them." - Esei spooks @Elexia and @Coraline (with Nocht's approval, even!)

A Secret - Esei accidentally helps convert a Celestian to the Glomdoring, with Nocht. There are decapitated heads involved. (Still buying heads.)

silver and sable - Esei speaks to Elexia again, about their manse, and what they care for.

"You, however, have exceeded them." - @Rancoura questions Esei's doubts and self-loathing as they process her offer.

to be full of doubt - Esei worries about disappointing dad Nocht and being unworthy. His resulting pep talk is... predictably Wyrden.

Missing - Esei alarms poor @Nepenthe and gets a Talking To from Nocht later.

Esei and Ethna's Wedding - Esei and @Ethna finally got hitched! Too many of you guys to tag but I love every single one of you. Special kudos to @Viravain and Whoever may have been piloting Akuuko and Filib.

roadblocks - Esei returns with a greater sense of self-confidence than ever before (thanks to OOC efforts, go me!) and speaks to Nocht about Rhalkyr, their tasks for Him, and some worries said in His fulcrux.

Seren Child - Esei receives a letter from @Illyria via @Rhalkyr. They are intrigued.

Immoveable Object, meet Unmoveable Force - Esei helps Rhalkyr with his doubts. He really thinks he can out-stubborn them.

Heart's Home - Esei guides young Illyria on her path in the Glomdoring and the Order.

Reassurance - Esei helps Illyria with her doubts, too, as she moves through the Order.

"...the nicely Songs?" - Esei becomes sileni, gets teased by @Tikki, and then is drowned in flowers by @Lawrence who really IS naughty. They talk to Gurashi about it, after.

Fears - Esei contemplates Mother Night's liturgy against fear and what it really means. Filib interrupts, and they end up having an excellent, if mildly worrying, chat.


...That's a bigger post than expected! Will be keeping you all updated as Esei charges full speed ahead back into Lusternia. I know I've missed a LOT between joining and now, but hopefully with daily logs and saving each one, I will be better at it. Hope to see you all in the future.
my links!
profile picture drawn by Gurashi
Post edited by Esei on July 1
Tagged:
7