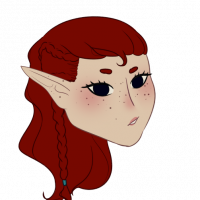 Esei Member Posts: 105 Adept
September 2019 edited September 2019 in Common Grounds
Greetings! I'm Esei and I'm relatively new to Lusternia. I recently read through the Histories and fell in love with the Elder Wars. I had the idea to turn it into a comic, which I put out to some people in my Lusternian circle and they said to go for it, so here I am.

Right now, @Gurashi and I are working on character design for all of the named and major Elders, Soulless, and Primal deities, as well as some spirits such as Sun, Moon, and Night. However, when we looked at the huge list of names and characters to create, we realized... maybe we need more than three people doing this. So, we're sending out a call for artists who want to join the discord.

I think that we'll have a few stages - Design (which will be sketches and lining), Layout, Format, Color (which will be split up all by itself into character, background, shading, etc), and Release... for each page. Every book will be standalone, which means some books will be shorter than others.

But I'm getting ahead of myself! If you want to help out, let me know.
Commission me!
Post edited by Esei on September 2019
14