So, I want to propose another significant rework, but this time to probably my all-time favourite aspect of Lusternia - aetherspace. Bear with me, I know this is a long read... and while these ideas rarely go anywhere, I think there is so much potential in aetherspace to make it something uniquely Lusternian, and incredibly engaging.

1. Gnome aethercrew (NPCs) can now be hired to automate modules for a short time.

To address the problems with population preventing enough to form a crew at certain times of the day, add a new means of hiring a random gnome who is learning how to crew in the aetherways. This allows you to obtain simple functionality for one of your ship modules without requiring a player, albeit at a lesser efficiency.

2. Aetherspace topography is updated so every room has directional zones

As a fundamental change to address the dizzying frustration of aetherhunting (move/move/shoot/move/move/move/shoot/move/move/move/etc), I'm suggesting that we add some complexity to a single 'room' on the aetherspace map, such that creatures, ships and swarmships (see below) in the same location can have simple relational positioning. Additionally, algontherine ships will now maintain a 'heading', a directional orientation in space (though simplified), which reflects towards which of the four zones they are currently facing. 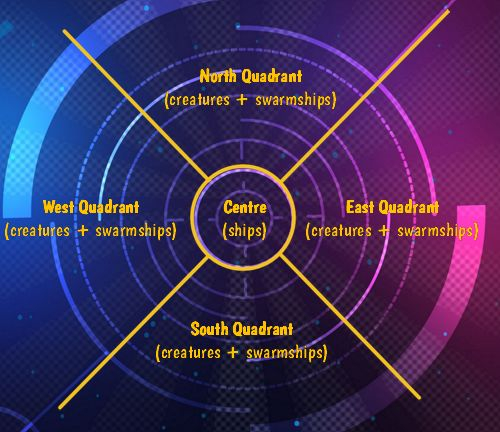 3. Aethercreatures are now drawn to ships at rest, and aetherbashing is reworked.

I don't know if I'm the only one, but the way that ship movement is penalised by drawing out aggressive creatures, at the same time that staying still is penalised because mobs will track to you and disable your modules with a lucky hit, is a really frustrating experience in aetherspace. Even during the times where you want to draw lots of creatures for bashing, the mechanics of it are pretty obnoxious to sit through as a passenger or perform as the pilot. So, the next set of changes tie in with the previous change to hopefully introduce a different bashing experience:

This means that the strategy in surviving a large swarm involves the pilot turning the ship to expose the strongest shielding (or fleeing if they are in trouble), the empath bolstering any damaged shields and repairing damaged hull or modules, and the gunners trying to damage down or crowd control the attacking swarm. Hopefully this gives everyone a part to play in an epic team battle, where everyone has options rather than optimally coding for the experience (though of course this is still going to be possible to some degree).
For an example of how to visualise the ship facing a direction, and having swarming aetherbeasts around: 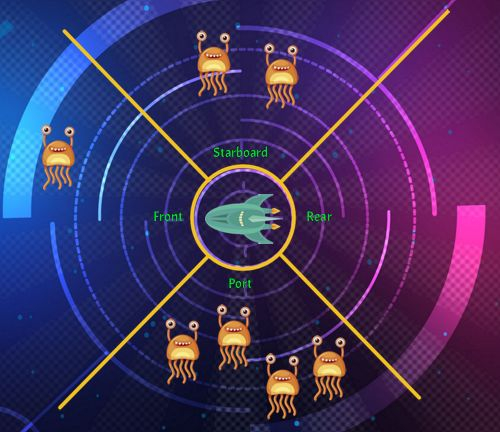 4. Tiny one-person craft ('swarmships') can now be rented temporarily or purchased via artifacts

To address the problem of locking aetherspace behind team mechanics only, a new way of either renting for gold or purchasing via artifacts a tiny craft for exploring or travel will be added. These swarmships are not customisable, but will be flavoured based on either nation or god alignment.

Note: I am not proposing as any part of this that any of the PvP mechanics of ship to ship combat be changed. I don't know enough about it to know whether there are any problems, so for now it can stay unchanged!