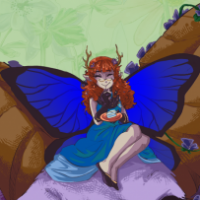 Aeldra , using cake powered flightMember Posts: 1,321 Transcendent
December 2020 in Common Grounds
Hey,
I just thought  I'd bring this up once more as it is something that personally frustrates me somewhat. Aside of me feeling that highmagic is the short straw compared to lowmagic in some ways (which is an entire different topic in on itself), I wanted to bring up the lockout of trades, in particular (but not limited to) in regards to economy and earning money.
From  what I can discern, these are the current bindings of  trades to the respective classes/magic-flavour:
artisan, cooking, tailoring, bookbinding, jewellery: none
poisons, herbs, alchemy: lowmagic
alchemy/lorecraft: wiccans
alchemy/brewmeister: bards
enchantment: highmagic
enchantment/tinkering: bards
enchantment/cosmic: guardians
enchantment/elemental: mages
enchantment/brewmaster: bards
forging: warriors
tattoos: monks
class associations to high/low magic:
monks, warriors, bards: free choice
wiccans, druids: lowmagic
guardians, mages: highmagic
That should highlight an disparity: choosing lowmagic grants the non-class-specific user access to herbs and poisons, which both are well sought-after and generate a good deal of  money on top of the general trade skills, whereas a highmagic user, you gain nothing that lowmagic wouldn't gain as well (for someone who likes crafting, another discouragement from being highmagic if you don't have to).
In terms of pure 'money generation', I feel also that having access to alchemy is a a much better option then having access to enchantment. Sure sigils and enchantment recharges are a thing, but compared to having alchemy, poisons and herbs? I personally feel you lose out a lot by ending up locked in highmagic. So, from a pure crafting analysis, your best choice if you're a crafter in a city, is to be a bard with both high and lowmagic. The only thing you lose out on is forging and tattoos, which aren't that high-demand anyway.
Why am bringing this up? Well, I kind of feel that at least herbs and poisons shouldn't be locked upon lowmagic. I'll agree that there's some merit in not every person being able to make everything, however it feels a little odd to have to become a warrior, monk or bard to be able to pick some flowers off the ground.
I always had the feeling that needing enchantments especially the forests draw the short draw, as getting those enchantments are always a major hassle for them.
What is people's stance on this? Am I overrating this and it's fine how it is ? ( i mean, I realize it's a rather specific problem, as a good deal of people only have one or two trades at most ) or do people agree with me? How could a possible solution look like?
I'll add, if classflexing wouldn't lock me into that class for the day, it would a lot less of an issue for me generally too. But, as someone who  participates also in PK, if I switch to a class, I also need to be somewhat okay with using it in a PK situation or sit out PK for that day just because I decided to restock my shop on e. g. herbs.
Avatar / Picture done by the lovely Gurashi.
1