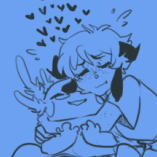 Cheliyi Member Posts: 33 Capable
December 2020 in Event Scrolls
Cheliyi has been pretty busy lately, but not too busy to make a few birthday wishes. Not every log is super involved with our favorite @Mysrai , but it's been a few stressful months, to say the least.


A Birthday Favor ---> https://pastebin.com/wTfam3DU (It's Chel's birthday month, and she has a request.)
You have emoted: Cheliyi steps off a vicious, ghostly white crow, watching the bowl of coals warily. As nothing actually happens, she just sighs, and kneels in front of the master shrine of Mysrai. She rummages through her pack and sets down a bowl of sorbet, and smiles weakly up at Their shrine.
You drop a bowl of twilight delight sorbet.
The shadow of an enormous wing sweeps over the fulcrux, passing over a bowl of twilight delight sorbet and causing it to vanish from sight.
You think to yourself: I hope They like cold food, yes. It is very hot where They are.
A Sea of Orange ---> https://pastebin.com/Z4FJfswJ (A certain Owl is very displeased, and Chel isn't feeling to great about it.)
An enormous screech of displeasure pierces your mind as a vast, alien presence elicits naught but an indescribable, inimmitable rage.
You tell Vespula Faelorna, One of Many, "Mm... yes yes. **an odd wash of grey, as if disappointed?** It is because we lost someone very dear to us a few years past."
You have emoted: Cheliyi winces, clapping her hands over her frills.
Faelorna tells you, "Who was this?"
You think to yourself: Is Dad okay?! **swirls of purple**.
Orange Sworn ---> https://pastebin.com/j3sBfLWm (A weird shadow visits the Glomdoring, and a local mugwump gets defensive.)
Midnight shadows coalesce around a new day, and Mother Night embraces the land in utter darkness.
You hum softly, your leaves resonating in tune with the small set of bone chimes.
(Glomdoring): Glaisne says, "Hello Glomdoring!"
As the hum on your lips grows quieter and more carefree, you notice among the shadows of the glade one that stands out more prominently than the others. Out of place, cast by no natural light or object, there swirls within some strange...dust? Perhaps. It does not seem to allow you to focus your eyes fully upon it.
You blink.
You think to yourself: ... Hello?
You have emoted: Cheliyi rubs at her eyes, before adjusting her spectacles. "Mm... my eyes are being badly again, yes."
Belated Birthday Thanks ---> https://pastebin.com/fPi77sA7 (Chel burns some esteem, saying a belated thank you to a certain My Sir Eye)
You have emoted: Cheliyi enters through the veil hesitantly, keeping her hands close to her chest.
You think to yourself: ... Are They awake? Do Divine sleep? Or do They sleep for fun...
You think to yourself: Mm... I will pray anyways. I hope it doesn't disturb Them if They are resting...
You think to yourself: I should ask dad about it later.
Keeping a Promise ---> https://pastebin.com/VQihqyWN (After promising the Best Bear Priest to visit their friend, Chel faces some of her fears. Sort of. Check @Gurashi 's log to see the fun home renovation!)
Before a web infested rock.
The shadowy outline of a twisted forest casts a dark gloom here. There is a heavy snowfall. Dark shadows slither across the craggy surface of the desolate hills, converging on a shallow concavity where the foothills meet. Towering high overhead, greater in mass than any other object in the valley, rises a large outcropping of rock, covered in thick strands of sticky webbing that infest and drastically alter the landscape with their corruptive touch. A mature sheep stands here looking bored and boring. A green eyelash viper is slithering about here.
You see exits leading northeast, east, southeast, southwest, northwest, and in.
The sun reaches the zenith of the firmament, pausing in his quest to allow the land to bask in his shining golden rays.
You think to yourself: **a hopeful voice, a small smile, "I remember how tall he is, and his favourite colours. Oh yes! He loves sweets. Especially iced cream, and he also loves curry."**.
You have emoted: Cheliyi shuffles quietly, and then sighs.
Quietly, you say, "Mister Akuuko...."
And that's it for now! I think this is how I'm going to be organizing my logs from now on, so that they fit a sort of narrative? More may come!
Cheliyi squints. Hesitantly, she asks, "Does He need pants?"
Tagged:
1
Sign In or Register to comment.
(c) Iron Realms Entertainment 2012.