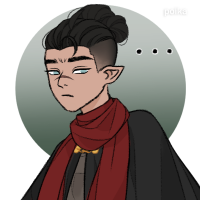 Gael Member Posts: 2 Inept
April 17 in Event Scrolls
In a quiet murmur, Devotee of the Tah'vrai, Adrien Shee-Slaugh says, "Would you like to meet a God?"
A short little story where @Adrien teaches a new member of the Glomdoring (me!) about Lord Nocht.
Adrien is an absolute delight to interact with, FYI.
https://pastebin.com/1z1Skqdg