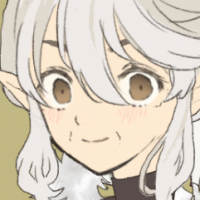 Xiran
May 2021 in The Real World
Shiri/Nejii gifted me with a fanmade Xiran design for Exceed, a fighting card game we've been playing.

Play style: "Your moves are good at long range, like moonbeam/waxing moon, but if people are in your face, you can panic Wild Swing and they'll still do something because the assists let you retreat or push people back." Wild Swing, likened to button-mashing, is where you flip over top card from your deck to play it as an attack instead of using the known cards in your hand.

He provided the card text, so I imagine the art for the featured assists would be

@Galaphyrae: Elegantly gliding in to correct Xiran's aim. (Her long range attacks overshoot otherwise, e.g., Moonbeam 2~4 would miss an opponent directly in front of her at position 1)

@Hiriako: Regally charging in with antlers lowered and headbutting the opponent back.

@Astrasia: Emerging from mist, ritually calling upon the trees to sap the opponent.

@Lendren: Sweeping in with ancestral spirits that pull Xiran into their dance.

Avatar made through Picrew
4