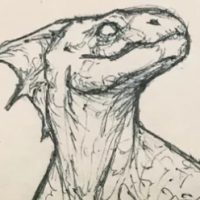 Eritheyl ** Trigger Warning **Member Posts: 1,823 Transcendent
July 23 in Last Chance Trading Post
Ryseni is a small house with a lot of big talk, and we're looking to bring ourselves up in number to match that overbearing ego! It's great house or bust, and we have irons in the fire to hopefully secure a historical tie intrinsic to Gaudiguch at some point in the future (near, dare I hope?).

What we're like:
Loud and dramatic. Ryseni is as quintessentially Gaudiguchian as they come, and we aren't shy about staking a claim on that niche. If there isn't some rumor or bold-faced scandal with one of our names attached to it, it's probably in the works - but always in the name of good fun when we can help it. Our public image is one of relative unease, which helps to obfuscate ongoing projects that might toe the line of morality. If you're at all familiar with Gaudiguch's historical leanings, especially along the lines of the Xeeth Labs and Mirage Prison, that is the direction we're recently set to follow.

We're perhaps most infamous for owning and "operating" a private harem. This den of iniquity really amounts to a few flavorful rooms fronting a much larger manse, which includes public amenities, private living quarters and a research facility under lock and key. We have some that keep their focus on embodying the harem lifestyle, some that dwell strictly on scientific aspirations and experimentation, and some that fall between with their own trails to blaze. The harem and harlotry front is due to fall out of favor as we move closer to the end goal of historical house, provided it remains an option, but bits and pieces of it will likely be left intact as it is still a facet of Gaudiguch's overarching culture.

Who we are:
Eritheyl is the loud and proud family patriarch, someone who wants and insists and will plot assassination attempts to secure the best for him and his. He's a pusher with a penchant for nagging, and his stubbornness is both an asset and a detriment depending on what side of it you land. He wants you to want to be your best self - misguided as his attempts at encouraging that can be, his heart is always in the right place. He's busy, always busy, whether its with politicking or designs or writing a book he'll never publish, but he will drop everything to teach or help out somebody in need.

Ansakta is a confusingly complementary opposite: a lover, not a fighter, he's most often the sympathizer and peacekeeper. As a trained courtesan his character doesn't stray too far from being the laidback trophy husband on loan from the Palace, but he has surprisingly keen advice whenever he ends up being dragged into disputes. He will always encourage you to do whatever makes you happy, even when it's a horrendously poor decision in the long term. Very be in the moment, live laugh love, etc.

Kihr is a magnet for awkward situations that usually end in blunders. Though he isn't the oldest, the strongest or the smartest of their kids, he has the biggest heart and does his best to stand as a beacon of positivity. His first instinct is always to help, even when he doesn't have the first clue as to what he's getting into or how he's going to gracefully get back out of it when it goes wrong, but somehow that works to showcase his charm. Usually squabbling with his angrier dad, usually in public, they're both embarrassing like that.

What we're looking for:
Currently I'd like to secure one additional progenitor OR first generation member, which would require an appropriately aged character to bloodbond with or be adopted by myself. This would give us avenues to continue building up our second generation which has just recently popped into existence, and is otherwise our main focus. Younger characters should look to Kihr as the current adoption seeker.

We aren't extremely particular about race, but dracnari is and will continue to be the family's chosen, so bonus points if you tick that box! Adoptions will not be considered for anyone outside of Gaudiguch initially, but if it becomes a part of your character's own story that they should move elsewhere, we don't intend to begrudge you for it toooooo too much.

You don't need to be great or even good at roleplaying, we have a very slice of life way about us currently. Until the ball is rolling on our historical aims, there is no great plot beyond the rather vague idea of flesh experiments in the secret laboratory. Oh, and we sell wyverns - the wyverns for the flesh experiments, the wyverns specifically bred to experiment with flesh, the flesh wyverns. Hooks exist for anyone who's interested, but there is no expectation to adhere to those pursuits.

If you have an existing character and would like to join our ragtag band of misfits, feel free to engage with any of us in an IC fashion to see how our interests and personalities align, or you can always reach out to me on an OOC level for questions or clarification. You can also contact me via Discord (schoochie bubblegum type#2842, it's a long story) if you're thinking of rolling anew and don't want to out your main.
Crumkane, Lord of Epicurean Delights says, "WAS IT INDEED ON FIRE, ERITHEYL."