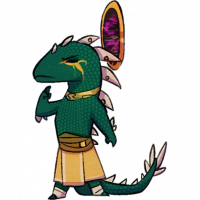 Gaudiguch has been in the grip of some divergent stories that all share a common root, that of Gaudiguch's poor and forgotten peoples. One follows the Flamewright, a would-be revolutionary that is recruiting the downtrodden in an eventual attempt to overthrow the city's government and reclaim it for the 'true' patriots; another concerns a group that styles itself as the Illuminati in the guild's absence, a splinter cult that transmogrifies its members (both willing and not) to grotesque ends; the last concerns the people themselves, struggling to get by in their pocket community that's essentially been left to stew and rot by an ignorant populace in the central city.

Most all of the events leading up to this are covered in Events #499, and this thread will concern itself with progression from my character's POV.